The export idea outlined in this report is a water pump which uses gravity and the water hammer effect to force water uphill (Inthachot, 2015).  Typical construction of the pump requires three main pieces; two one way check valves and one long tube with some form of bladder which acts as a pressure chamber.  Figure 1 illustrates the components of a generic ram pump.  As outlined in the diagram, water will flow in from a source located above the pump and force the waste valve to slam shut.  Inertia carried by water flowing in will push up through the check valve and into the air chamber.  When a large enough volume of water passes into the air chamber, it becomes compressed exerting a force back down towards the one-way check valve which slams shut.  The water attempting to re-enter through the closed valve is then forced out the delivery pipe and up through a hose either into a field, tank, or other storage medium (Inthachot,  2015).  Ram pumps require the topography to be hilly with enough change in elevation for the pump to function making Nepal an excellent location for this technology. 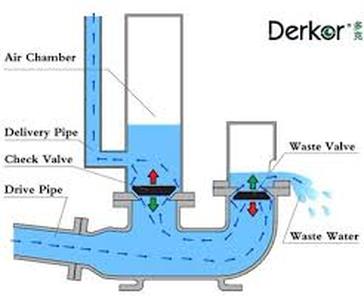 Of the 28.5 million inhabitants of Nepal, over 80% are located in rural areas and practice subsistence agriculture (World Bank, 2016).  This form of agriculture entails growing enough to feed ones’ self and family with little to no excess produced (Rijal, 1991).  Crops grown for subsistence agriculture are food crops versus cash crops, the difference being that food crops are consumed while cash crops are generally dedicated to further production.  With crops and livestock representing the majority of day to day activities, having water pumped directly to where its needed would greatly augment the quality of life of anyone who purchased a pump.  More time could be spent tending to crops resulting in higher yields, raising livestock resulting in higher milk and meat production or improving knowledge of current techniques and technologies.

Common food crops grown in the Hill and Mountain regions consist of maize, millet, paddy, potatoes, sugarcane, and vegetables.  Seasonality in the upper hills and mountain regions limits production of certain crops such as vegetables and sugarcane to the lower areas of the hills and terai regions. Overall consumption and diet is largely dependant on rice (paddy) as it is a staple crop which is easily stored and is calorie dense (McDonald, 2006).  One study done by Rajendra Parajuli examined the diets of Nepalese from three different villages and found that males consumed 627.5 grams of rice per day with another 436.5 grams being consumed per female.  This equates to 1064g/day for one couple which translates to 1.064 kg/day (Parajuli, 2016).  Rice presents a challenge as it requires large amounts of irrigation and water to grow productively.  The chart from UNESCO outlines the demand for water per kilogram of rice (UNESCO, 2009).  Conversion rates for liters to gallons are 0.26L/G meaning that 293 gallons are required for 1kg of rice (Metric Conversion, 2016).
Livestock rearing is another aspect life for the average Nepalese family with 96% of both hill and mountain inhabitants owning between 5.4 and 7.7 animals per household (Rijal, 1991).  Typical animals raised are goats and cattle with cattle including buffalo, yaks, and Brahman varieties.  Below is a water intake chart for cattle.  Goats consume much less water at an average of 1-2 gallons per day (Ontario Goat, 2016).  With animals requiring an additional 10.8-75.6 gallons per day for 5.4 animals or 15.4-107.8 gallons per day for 7.7 animals, additional strain is put on families who travel to collect or who divert streams for irrigation (Agri-food Canada, 2015).  With a pump, more water would be available for thirsty livestock increasing both the ability to subsistence farm and the opportunity for excess produce in the form of milk or meat to be sold for profit.

With little infrastructure in the hills, water collection and transportation is long and arduous requiring multiple trips with heavy containers either carried by family members or livestock.  Being able to pump the water would free up time for agriculture, allow more animals to be raised and would improve the overall quality of life for anyone who purchases the pump (Bardsley, 2005).  The Clemson design is capable of pumping 475.2-1995g/day meeting and surpassing daily requirements of both crop and livestock, leaving more than enough water for washing, bathing, cooking and other tasks (Clemson, 2003).

​Due to the current state of Nepal and its infrastructure coupled with a lack of instituted programs to communicate with rural farmers, the idea of exporting a ram pump to Nepal is not feasible.  Once infrastructure is in place and ties have been made between government and farmers, it is economically sustainable to export ram pumps to Nepal.  The initial investment is high but the improved quality of life, ability to raise higher numbers of livestock and more productive crops outweigh the costs.  The topography and geography of the landscape is perfectly suited for the apparatus and the lifespan provides long term benefits.  In conclusion, it will be viable to export ram pumps to rural Nepalese in the future.